During the armistice of 1918 at the end of World War I, it was agreed the German High Seas Fleet should be interned in Scapa to await the outcome of the peace treaty.  After a year of isolated internment, on June 21st 1919, Rear-Admiral Ludwig von Reuter believing that peace negotiations had broken down, and that his ships were to be seized by the British Navy gave the command to scuttle.  Watched by a group of school children on a day trip from Stromness, over 50 ships of the German navy sank.

The rights to this naval graveyard were subsequently purchased by Ernest F.G. Cox, "the man who bought a navy", and an amazing salvage operation took place between 1929 -1939.  Of the original German fleet, only 3 battleships (Konig, Kronprinz Wilhelm and Markgraf) and 4 light cruisers (Brummer, Dresden, Coln and Karlsruhe) remain, but coupled with the other wrecks in the area, they make for one of the world’s most prolific dive sites.

1.   SMS Coln - Built in Hamburg, and launched in 1916.  A "Kleiner Kruizer", light cruiser/mine layer displacing 5531 tons and an overall length of 510 feet (155 metres).  The Coln lies in 30-35 metres of water, resting on her starboard side.  The least depth over her port side is about 20 metres.  She is relatively intact, apart from a hole blasted at her stern, and minus her propellers and anchor.  The features of the ship are clearly recognisable though covered in a variety of marine life, including sponges and brittlestars.

2.  SMS Dresden - Built in Kiel and launched 25 April 1917.  Light cruiser/mine layer displacing 5531 tons, and similar measurements to the Coln.  Now lies in 28-38 metres of water on her port hand side.  The least depth over her is about 17 metres.  She is largely intact with many of her original features still in place.  The anchor chain still runs from her bows to the seabed.  She has a rich and diverse covering of marine growth, which serves to attract shoals of fish, particularly over the shallower areas of the wreck.

3.  SMS Brummer - Built at Stettin, and launched in 1915.  Light cruiser/mine layer displacing 4308 tons.  She has an overall length of 462 feet (140 metres).  As with the other light cruisers, she was built for speed and with her two turbines and twin propellers she could reach speeds of 28 knots.  She lies in 32-36 metres of water on her starboard side.  The least depth over her port side is about 20 metres.  Some salvaging has taken place on her, particularly around the engine room, but she is nevertheless in good condition and like the Coln and Dresden is an exciting dive.

4.  SMS Karlsruhe - Launched Wilhelmshaven in 1916.  Light cruiser/mine layer displacing 5354 tons with an overall length of 490 feet (150 metres).  Like the other ships of the German High seas Fleet, she was also armour plated and heavily armed.  She now lies off the northerly tip of Cava in 24-28 metres of water.  The least depth over her port side is about 12-14 metres.  The wreck is lying on a slope, and the deck side is about 4 metres deeper than the bottom at her keel.  Because of her shallow depth, the Karlsruhe has been more extensively salvaged and has been more exposed to the effects of winter storms.  Her stern section remains relatively intact, and her bow gun turrets can still be seen.  She is an interesting dive despite her condition, and the shallow depth means she is covered in a profusion of marine life.  The seabed near the wreck is littered with debris, as well as scallops and queenies. 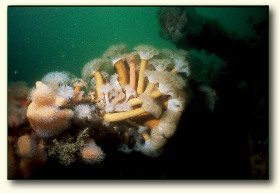 5.   SMS Kron Prinz Wilhelm - Konig Class Battleship displacing 25,390 tons.  Sister ship to the Konig and Markgraf, she was launched in Kiel in 1914, one of the largest dreadnoughts ever seen.  The Kiel Canal had to be specially widened to let her and her sister ships through upon completion.  She has an overall length of 575 feet (177 metres) and is lying in 34-39 metres of water.  Lying on her starboard main deck, much of her superstructure is buried in the silty bottom.  The least depth over her is about 15 metres.  Of the three battleships, she is in the best condition, although there has been some blasting by salvagers, particularly in the area of the engine room.  Her main armament can still be found, and the wreck makes for an exciting dive, not just for wreck ferrets, but also because of the abundant life and the sheer immensity of her size.

6.  SMS Konig - Launched Wilhelmshaven in 1914.  Konig Class Battleship displacing 25,390 tons with an overall length of 575 feet (177 metres).  Powered by three turbines and with three great propellers, she could reach speeds of 23 knots.  The Konig was the flagship of the Third Battleship Squadron, one of three squadrons that had formed the High Seas Fleet at the Battle of Jutland.  The colossal weight of her superstructure with its five main gun turrets meant that when she became flooded with seawater, she became top-heavy.  As a result she now lies upside-down in 38-40 metres of water with her starboard side main deck only a few feet above the bottom, and her superstructure is deeply embedded in the fine silty sea-bed.  The least depth over her hull is about 20 metres.  The wreck has been blasted in places by salvagers.  The wreck of the Konig is immense, and despite her condition, she makes an interesting dive.

7. SMS Markgraf - Konig Class Battleship, launched Bremen in 1913.  With an overall length of 575 feet (177 metres), she displaced 25,390 tons.  Like her sister ships she was heavily armoured with ten 12-inch main guns set in five turrets, fourteen 5.9-inch guns and an array of 3.45-inch anti-aircraft guns, as well as five submerged torpedo tubes.  The Markgraf now lies on her port side main deck in 45+ metres of water.  The least depth over her is about 20 metres.  Another interesting wreck, and like the Kronprinz, some of her superstructure can be seen on her starboard side, including one of the 12-inch guns.

8.  V83 - Torpedo Boat - 269 feet (84 metres) in length she displaced 909 tons.  The V83 was salvaged by Cox and then used in his many attempts to raise the Hindenberg, once the Hindenberg was eventually raised, she was dumped in her present condition on the east of Rysa Little.  She lies on a shelved bottom with her bows in 5-8 metres of water and her stern section lying in 20 metres.  Her midship and bow sections are well broken up.

10. Bayern Gun Turrets.  The Bayern was a 28000-ton battleship, and had a formidable range of state-of-the-art armoury, including eight 15-inch guns set in four twin turrets.  Like the other battleships, she had turned turtle when scuttled and lay with her superstructure embedded in the silty bottom.  When Cox came to raise the Bayern in 1933, she had been on the seabed for 14 years, and was well settled into the bottom.  During the salvage attempt, the gun turrets were torn away from the hull, and these still lie on the seabed where they fell.  The turrets lie in about 38-42 metres of water.  They each weigh about 600 tons and lie upside down embedded in the silty seabed.  The barrels of the guns themselves cannot be seen, but the inner workings and mechanisms are accessible.